Looking to throw a boat rooster tail on your next trip to the sea? Below, you will learn everything you need to know to produce the highly impressive and equally annoying (for other boaters) rooster tail!

Making a rooster tail actually isn’t that challenging, but on some boats, it may be more difficult to achieve than on others.

Even if you are struggling to produce a rooster tail, we’ll have a look at a few tricks that you could use to make your boat shed fountains!

What is a Boat Rooster Tail?

A rooster tail is a jet of water produced by boats directly in the wake while in motion. This jet is called “rooster tail” because it resembles, well, a rooster tail.

Although rooster tails do look cool, they are typically negatively perceived by boaters. The reasons for this are as follows:

What Causes a Rooster Tail on a Boat?

Rooster tails typically occur when the boat is trimmed too much up – that is, the propeller shaft is facing upwards. When the prop rides high in the water, water is coming off its very tip, forming a rooster tail.

Not only that, but the faster the boat moves, the taller and more pronounced the rooster tail becomes.

Earlier, we’ve mentioned that if a boat produces a rooster tail, then its trim is sub-optimal. Ideally, when a boat is on plane, the prop shaft is parallel with the water surface. When the propeller shaft is parallel to the water, it propels the boat strictly forward.

If you trim the motor too much up or down, you will decrease its efficiency. Consequently, the boat’s thrust will be directed more up/down rather than backward. Not only does this make the boat less efficient, but it may also put excessive stress on the prop and the motor assembly.

So-called jet boats can also produce rooster tails, but they are very different from rooster tails made by motorboats or powerboats.

To propel themselves, jet boats gather water from beneath via intakes and then expel it through a nozzle in the stern.

So essentially, jet boat rooster tails are a normal part of operation rather than an undesirable side effect (like in powerboats or motorboats).

With that said, you can adjust the magnitude of a rooster tail in a jet boat too. It’s done in the same way as in motorboats/powerboats – you just need to trim the motor higher.

What Do You Need to Throw a Boat Rooster Tail?

There is one key prerequisite to throwing a boat rooster tail – an outboard or sterndrive motor that can be trimmed up or down. If the trim of your boat motor cannot be adjusted, then you will be stuck with whatever rooster tail your boat’s design can produce.

Another option would be to use boat rooster tail devices. These are intended to be mounted to the transom of your boat to enhance the size and height of your rooster tail. We’ll talk a bit more about available boat rooster kits below.

How to Throw a Rooster Tail with Your Boat?

If you do want to have some fun with rooster tails, then below is a step-by-step guide on how to produce it.

If you cannot throw impressive rooster tails or cannot make your boat produce any tail at all, then there may be three things happening:

In most cases, tweaking your speed and trim should allow you to throw a rooster tail. If this does not work, then your boat’s design may not be ideal for a rooster tail.

Fortunately, there is still one thing you may do. You could install a rooster tail kit on your boat.

We are aware of only two boat rooster tail devices. One is a jet boat rooster tail kit sold by CPP Performance, while the other one is available on roosterboost.com. These two kits are fairly unique and deserve a brief overview.

Called Rooster Booster 8 Degree Wedge, the rooster tail device from CPP Performance is intended for boats with Berkeley-style split-bowl jet drives. If you aren’t running one of these, then have a look at the other rooster booster device below.

CPP Performance claims that this booster throws the longest rooster tail out there thanks to its 8-degree angle. Well, unless you manage to modify this thing to use it on powerboats or motorboats, you won’t be able to confirm or refute this claim.

The Rooster Boost is intended to work with any boat. It is available in two variants:

The Rooster Boost is adjustable and is covered by a money-back guarantee. If it doesn’t fit your boat, you should be able to easily get a refund from the seller.

Rooster Boost kits cost from $179.99 to $299.99, so they are a bit expensive. But they are more versatile than the CPP Performance Rooster Booster. The Rooster Boost fits more boats and can be adjusted for better results.

If You Struggle to Achieve a Rooster Tail, then Your Boat Design is Efficient

Struggling to throw a boat rooster tail? Well, there’s a positive side to this – your boat’s design is probably highly efficient. This isn’t that bad, is it?

Rooster tails do look cool, but they don’t serve any practical purpose. Besides, you may severely damage your motor assembly when attempting to throw a rooster tail. Not to mention that you will be annoying any other boater that is unfortunate enough to be near you.

Hopefully, our tips will help you throw a magnificent boat rooster tail!

But please do remember about the risks of this activity. If you do want to give rooster tails a shot, then at least make them away from others.

You most likely wouldn’t want your boat to be sprayed by others. So respect other boaters in the same way you would want to be respected.

How Should You Pass a Fishing Boat 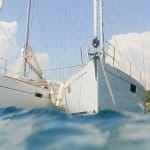 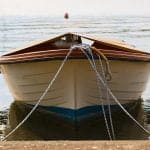 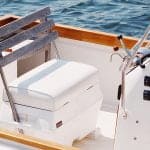 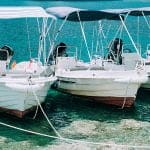