Affiliate Disclosure: Some of the links in this post are affiliate links. As an Amazon Associate, we earn from qualifying purchases. Read our affiliate policy for more information.

How to get WiFi on a boat if you’re planning a boating adventure, something you might want to consider having on the trip. After all, wouldn’t you like to be able to communicate with the outside world, and get yourself entertained when you’re out in the middle of the sea?

While it might seem like a tall order, it’s possible to bring your internet with you to the sea. In this article, we shall explore 4 main ways to do this, including using a WiFi extender, amplifying cellular data, satellite internet, and using a portable MiFi device.

The first piece of good news is that most marinas already offer WiFi connections. This is probably the cheapest kind of internet connection 1) you could get for your boat.

However, it has a downside, which is that you can only make good use of it if you’re close to the shore. Go too far and the signal will drop, leaving you with a video that won’t stop buffering on YouTube.

If you want to take full advantage of the WiFi coming from the marina, even when you’re far from shore, you’ll need to get yourself a WiFi extender.

Of course, the actual range of the WiFi extender you get depends on the specific one you get, and what its range is as claimed by the manufacturer.

That said, even if you get a very strong WiFi extender, there are a few factors that govern just how far away you can go before even the best WiFi extender reaches its limits:

Assuming you’re getting favorable results for all the above factors, you should be able to get a good signal from quite a distance with a WiFi extender.

Here are some WiFi extenders you might want to consider getting from Amazon:

This is a fully integrated WiFi antenna, router, and radio that offers a strong and clean internet signal on your boat or another vessel. You can use the LAN feature to connect directly to the internet or do it wirelessly by attaching WebWhip to any regular router.

You can also easily use the internet without having to set up any extra software on your devices. All it takes to get on the internet is a device with a web browser on it.

The Shakespeare has a range of 7 miles and the built- in router will work with any standard WiFi router, giving up to 100+ Mbps of data.

Buy it at Amazon

The Wave WiFi extender is pretty powerful as it is capable of outputting up to 1 watt of power. It can also pick up a hotspot signal from as far away as 12 miles, so long as the signal is strong and the boat maintains its line of sight with the hotspot source.

This WiFi extender also generates its own hotspot within the boat.

Wave is an ethernet converter, hence it supports direct connections to ethernet devices on the boat, giving high and interrupted performance, either as an independent network or part of the boat’s overall network. It also has a built-in amplifier with a high receiver sensitivity of -107 dBm and a speed of 11 Mbps.

Get it at Amazon

Another great Wave product is the Wave WiFi Rogue Pro, which is ultra-small and compact with ethernet conversion capabilities.

Each of its components comes as part of the installation kit when you purchase it, and it has a substantial 1-14 inch base to support many different marine extender supports.

Not only does it have protection from moisture and dust, but it is also covered in stainless steel, which further protects it from impact and humidity. It’s very easy to mount and can be directly connected to any ethernet enabled device, switch, or router.

Check it at Amazon

If getting a WiFi extender sounds like too much of a hassle for you, there is another option, which is to use your cellphone to surf the internet.

You just need to switch to a cellular plan that includes an internet connection, and then boost the phone’s signal using a cellular signal. That should enable you to get connected to the internet as far away as 10 miles from the shore.

Don’t forget, however, to buy yourself a sim card that can be used outside of your area, or even the country. This is especially important if you’re going to be enjoying your sea journeys outside of the country, such as in Hawaii or the Bahamas.

So how do you boost your phone’s signal?

Here are a few signal boosters you can consider purchasing:

This is a great signal booster that can work in a variety of conditions and places, including the home, the office, and the boat. It is omnidirectional, meaning a direct line of sight is not required, and can both transmit and receive signals from cell phones in the range 810 to 900 MHz and computers in the range 1800 to 1990 MHz. Considering the compact design it comes in, this is a great performance. It’s also designed, assembled by hand, and tested in the USA 2) for great quality, durability, and performance.

This is one of the best continuous gain antennas you’ll find on the market. It requires no adjustment or fine tuning and has all the gain you need. It can also work on multiple bands at the same time, including Cellular, 2G, 3G, 4G, 5G UMTS, CDMA, ISM, LTE, WiFi, Wi Max, GPS, Homeland Security, Military, Aerospace exploration, Satellite, Radio Telescope, and a whole lot of others.

It is also waterproof and dust proof so it can be used outdoors with no fear.

Buy it at Amazon

Satellite internet requires 3 satellites in order to get an internet connection delivered to you. The first satellite is at the internet service provider’s hub, which will be pointed at the sky.

The second satellite is in space, which picks up the signal from the internet service provider and beams it back down.

The third satellite is on your boat or other vessel and picks up that signal. It can then act as a hotspot on the boat, enabling other devices to connect to the internet.

Satellite internet allows you to have an internet connection to do such things as messaging, voice calling, watch HD TV, and browse the web. Companies have created specialized internet satellite dishes that are made just for moving boats and other vessels so that you can enjoy a strong internet connection no matter which part of the sea you’re in.

With satellite internet connection, the factors you have to worry about are the movement of the boat, the cost of the internet, and the distance from the shore. Satellite internet is a bit more sensitive to swaying than other forms of internet, since it needs to maintain line of sight with the transmitter satellite in space. You can therefore expect a poor connection when there is a storm at sea or a strong wind.

You may also want to consider how far away you are from the shore because the more remote your location the higher the cost of the internet. A stronger signal requires a fatter wallet.

In order to take full advantage of satellite internet, you will need a dish set up on your boat. This isn’t the kind of internet you should invest in if you do not regularly go out boating, as it is a substantial investment to buy a satellite dish, and the subscription to an internet service isn’t cheap either.

This is one of the cheapest ways of connecting to the internet while in a boat out at sea. All you need is a portable MiFi device, which then becomes a hotspot for other devices on the boat to connect to and surf the internet.

This is an excellent device for frequent travelers to have, especially if you’re planning on traveling abroad. The MiFi is portable, which means you don’t need to do any complicated mountings or any fancy equipment or cables for installation.

The biggest concern you might have with this device is that it is very small, which means there is a constant danger of it falling down, slipping off the boat, getting wet, or even getting lost. You need to keep your eye on it.

If you consider getting one, below are some great deals to check out:

This Huawei device offers fast internet connection with download speeds of up to 150 Mbps on the 4G LTE band and up to 43.2 Mbps on a 3G connection. You can also connect up to 10 devices at a time and the device supports multiple languages, including English, German, Italian, and Spanish.

You can easily get 4G LTE connection in places like Europe, Africa, the Middle East, and Asia, and a 3G connection in the rest of the world. The battery can also last for up to 6 hours when operation and up to 300 hours when on standby.

Another great feature of this device is that it is unlocked to all networks, meaning you don’t have to worry about which SIM card you use on it.

Get it at Amazon

This is a SIM free MiFi, which means you can connect to the internet anywhere in the world without having to either swap your SIM card or have a dual SIM phone. It is also capable of connecting up to 5 devices at the same time and offers a 4G LTE connection in over 100 regions and countries.

The download speeds can go up to 150 Mbps. In fact, with just 50 Mbps, you can watch your favorite movies and check out the latest going on on your favorite social media platforms.

Check it at Amazon

How to Get WiFi on a Boat – Conclusion

As you can see, there are plenty of options at your disposal when it comes to getting an internet connection out at sea. The above 4 are all easy to implement.

If you’re on a tight budget and will be far from shore, consider getting a MiFi device. Otherwise, if you don’t mind paying for satellite internet, it should be able to cover you anywhere in the world.

If you want to take full advantage of WiFi from the marina or your phone and aren’t going too far from the shore, then consider getting a WiFi extender or cellular signal booster.

Whatever you choose, you don’t have to worry about going offline when at sea.

Thanks for reading and we encourage you to check other posts in our blog. 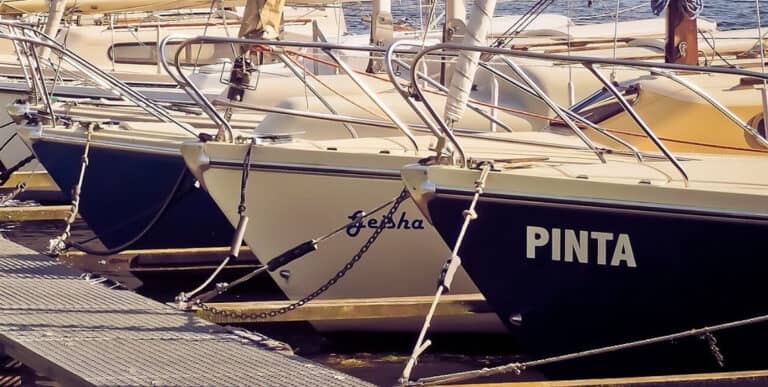 How To Name a Boat? Practical Advice, Good and Bad Examples