Let’s make it clear from the very beginning how long does it take to cross the Atlantic?

So it’s three to four weeks of constantly sailing day and night, tired, wet, and miserable.

In this post we are sharing a compilation of what you need to know essentially to estimate the time to sail across the Atlantic, and minimize the suffering of being alone in the middle of the ocean.

First, let’s define the problem we are going to face.

The distance of a journey across the Atlantic is roughly 3000 nautical miles, where 2700 NM is the classic distance between the Canary Islands and the Caribbean.

Still, a boat never travels in a straight line; neither does she hold a constant speed, and there is also weather, waves, and other stuff.

Look at the online charts to excite yourself about what a crowd is there when it’s the best season to cross the Atlantic. Every pink mark is a private boat!

NOTE The snapshot was taken in late November, the high season.

So, to sail across the Atlantic may take about 20-25 days for most of them to travel, or it may eventually take a whole month in an unfortunate situation.

Does the Direction Matter?

It is obvious that we can cross the Atlantic in both directions. So does it matter at all?

How Long to Sail Across the Atlantic From West to East

You will probably take the so-called Northern Passage eastward from America to Europe across the Atlantic. That means you travel the main distance, about two thousand miles, from the Bermudas to the Azores, then head to the coast of Portugal.

The westerlies are yet another type of ocean wind; they work similarly to the trade winds in the opposite direction. However, the westerlies occur farther to the North, which is why we have the Northern passage for traveling across the Atlantic eastward, from the Americas to Europe.

Westerlies are the prevailing winds in the latitudes between 30 and 60 degrees; that is why we need the Northern Passage when crossing the Atlantic eastward, from the Americas to Europe.

Here is the breakdown of the route:

Also, remember that the Northern route in the eastward direction will probably take a little longer compared to the “classical” Southern when you cross the Atlantic westward.

And From East to West

As we’ve mentioned earlier in this post, the Southern Passage fits best to cross the Atlantic westward – from Europe to the Americas.

Everyone starts from the Canary Islands, embarking on the Southern route across the Atlantic, including you, me, and Christopher Columbus, in 1492 (the yellow line on the image below).

Some sail to Cape Verde, offshore from Dakar, and then stright to the west (the orange line).

Here is the route breakdown:

The total distance to cross Atlantic from East to West is around 4300NM and time needed is about 26-35 days (three to five weeks).

What is the Best Time to Cross the Atlantic by Sailboat?

The truth: you cannot just go any day across the Atlantic unless you want to spend a whole month or more sailing in the ocean (yeah, what exactly Columbus did wandering around for three months).

The weather and the temperatures jointly make November and December the best time to sail across the Atlantic. Also, you’ll catch those sweet trade winds (just keep reading to find our more) to ease your journey, which promises to be sunny in this time of the year.

The ocean is warmer, hurricanes are less probable, and the trade winds work in your favor once you sail from the Old World to America this time of the year, in November and December.

How to Use the Trade Winds?

So, in the Atlantic, the trade winds will push you along the equator southeast towards the Caribbean at a particular span of the year.

Now, all you have to do is pick a good season to take the best advantage of the trade winds, and it is November and December – just head south from Tenerife (the Canary Islands) at least 100 miles down for the trade-wind magic to begin.

The trade winds are predictable and blow in the same direction every time. As a result, the trade winds served well for centuries, allowing significant commercial benefits for experienced sailors: such as fewer supplies and less fuel.

How Long Does It Take a Cruise Ship to Cross the Atlantic?

It depends on a cruise ship you are on to cross the Atlantic, you know, Titanic hasn’t yet arrived. Seriously, crossing the Atlantic nowadays by cruise ship takes 6-8 days.

How Long Does it Take to Cross the Atlantic by Motor Yacht?

Until this point, we’ve mentioned crossing the Atlantic by an average sailboat, like 40 feet, making 5-6 knots average speed, where the average is not maximum.

A regular motor yacht makes an average 10-12 knots cruising speed, which should be significantly lower compared to a maximum speed you’ve performed while fishing with friends. As you carry all fuel through the ocean, you care about the efficiency, where 10-12 knots should serve as an efficient cruising speed.

Without prejudice, this is already pretty close to what a cruising ship performs through the Atlantic.

Before starting your passage math and planning your journey, estimating how long does it take to cross the Atlantic ocean, consider our short list of tips for a first-timer to remember about the time and the distance:

Choose a Proper Time to Travel

Local locals say that hurricane season in the Caribbean officially lasts from June to October, with peaks in June and July, going milder since August. The trade winds blow well in November-December, and the period counts as the best season for that.

Stick to the Average Speed

Average speed is not the maximum speed and not even the cruising speed. While counting how long does it take to cross the Atlantic, consider the average speed shall be surprisingly low, which you will be fighting for.

Speed, fuel consumption, wind, waves, and other conditions make us count miles instead of the time required, which means “gallons per hour” rather than a distance traveled per hour.

In terms of how long does it take to cross the Atlantic, also understand that an average speed of a single-handed boat, logically, may be lower than if you are a crew of at least two people.

Let’s call it a crew dilemma: the bigger crew makes it easier to sail; on the other hand – such requires more supplies. The equilibrium to find you need, Yoda said (ha-ha, we’re kidding).

Nonetheless, many-many boaters travel single handed, and yet another big number of us travel as couples.

Do not plan any “important business meeting” on the next day after your expected arrival. That means – you’d better have a lot of spare time, as your travel across the Atlantic may suddenly become a little longer.

Mind food and water supplies. We have a separate post advising what you need to know before going through the Atlantic. However, knowing the how-long, do not forget to supply an excessive amount of food and fresh water. And fuel.

How Long to Sail Across the Atlantic – Final Words

Speaking about how long to sail across the Atlantic, we emphasize on sailing, I bet the majority of all private boats crossing the Atlantic are sailboats, rather than motorboats.

The price rises higher when you want to go across the Atlantic by motor, because the fuel needs extra storage and hits the price (by the way, for safety matters, remember to double an amount of fuel calculated for the distance).

A good news is that usual boats go through the ocean. The internet is full of reports about how 30-40 foot boats cross the Atlantic both directions, so you can do it too.

So just choose the right time, plan everything properly and book 3 to 4 weeks to cross the Atlantic, and it will be something you will remember for the rest of your life. 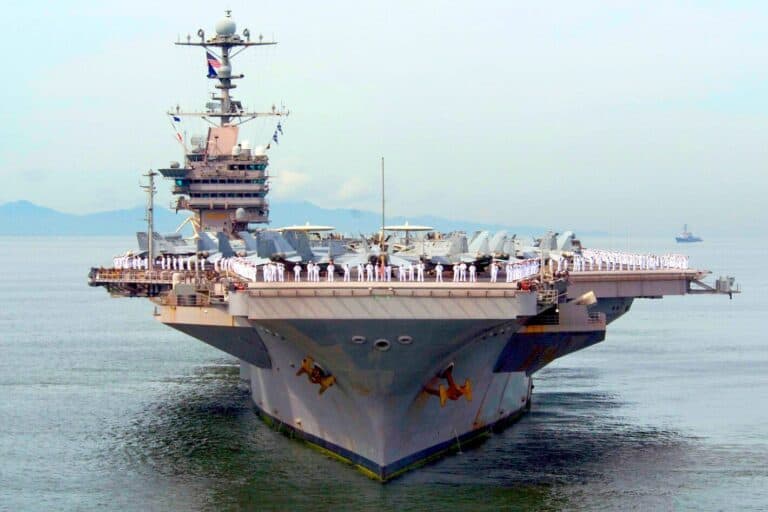 Why Are Ships Called She? All Versions

How Do Sacrificial Anodes Work? Find Out Everything Here