Why are ships called she? Because they are the phantoms of delight, wearing bonnets, unveiling their curves. While ships are in the man-dominated industry, men make ships as beautiful as their sweethearts. This is a very easy explanation of why are ships called she, why we love them and personify them, yet we have more to say about it.

Why Are Ships Called She – the US Navy Confirms

Well, here is an unofficial opinion of the US Navy, of course, yet remarkable and worth mentioning. Admiral Chester William Nimitz, the Commander of the US Pacific fleet of the past century, once said bluntly enough why are ships called she:

“Ships are referred to as she because it costs so much to keep her in paint and powder”.

Ha-ha, so true! Nimitz has spent two world wars in the navy, it was he who represented the United States at the capitulation of Japan. The whole class of aircraft carriers, Nimitz-class, is named after him. His opinion is gold!

Admiral Francis Drake Foley of the US Navy is on the stage now to add up. He shares a broader explanation on the topic, he starts with:

“Ships are referred to as ‘she’ because men love them.”

“She is slim-waisted, well-stacked, and has an inviting superstructure. It is not so much her initial cost as it is her upkeep that makes you wonder where you founder. She is greatly admired when freshly painted and all decked out to emphasize her cardinal points,” – that’s said about ships!

“A ship costs a lot to dress, sometimes blows a bit of smoke, and requires periodic overhauls to extend her useful life. Some have a cute fantail, others are heavy in the stern, but all have double-bottoms which demand attention.”

Why Are Ships Called She – the Royal Navy Confirms

Admiral Lord Alan West of the British Royal Navy nailed it why are ships called she:

Admiral West in the interview to CDC Radio

“Ships have been the most amazing achievement. They’re beautifully constructed. They look after you. They, in a sense, nurture you,” – he added.

Unlike the US Navy, the British Royal Navy released an official statement on that:

Ships Are Called She in Latin Languages

Wait, do not throw stones at us, yet. The linguistic version of why are ships referred to as she is the most popular one everywhere around the internet. We bring it up to your judgment, then we say why we doubt this version (but the ships are “she” any way, there’s no doubt!)

Besides that the masculine EL BARCO exists, and there is also the feminine LA BARCA in modern Spanish. The language is often nicknamed Vulgar Latin by professionals, so it takes a lot from the original Latin.

In Spanish, LA BARCA as a word is officially used to refer to smaller water crafts, but the application may be compared to the word “boat” in English – while being officially a term for smaller vessels, the navigators traditionally use “boat” for all ships of any size. Just like we refer to women we love using the diminutive terms constantly. True.

However, the controversy is that the Latin languages do not have a neuter gender at all. That means all words we borrow from Latin to English are originally either feminine or masculine, but we do not call, for example, a pasta a “she”.

We leave this version here for the comprehensiveness of this post, but we stay tied to Admiral Foley’s suggestion: “Because men love them”. This is a winning one, so far!

Ships Are Called She in the Greek Language

Who was conquering the seas long-long before the Romans? Those were the Greeks! The Romans were not the coolest ones at sea whatsoever, so history suggests, but the the Ancient Greeks contributed a lot to navigation as a field of knowledge.

The Ancient Greek word was NAUS. Worth to mention, that there was no “u” letter in the Latin alphabet, while they used the v-letter to express the u-sound. The fact makes the Greek NAUS and the Roman NAVIS merely the same word, and they both share the feminine gender.

The words “nautical”, “navy”, and “navigation” derive from those Greek/Roman Navis/Naus words, which is already obvious.

Names of Tall Ships Often Are After Women

Names of ships are often feminine: mermaids, witches, queens, and goddesses. Figureheads are usually namesakes. Santa Maria of Christopher Columbus, Victoria of Ferdinand Magellan, Arabella of Captain Blood, USCG Lady Washington, HMS Queen Elisabeth, S/Y The Hooker is my boat, these are only a few examples out of thousands.

Do Women Onboard Bring Bad Luck?

No. Even though some could use the trick to their advantage, either the sham has been developed just recently, or may it be jealousy of the goddess of the sea that matters, but Jacquotte Delahaye, Anne Dieu-le-Veut, Artemisia of Caria, Donna Tobias, Laura Dekker, and many other notorious sailors of the past and the present continuously prove this opinion wrong.

Why are Ships Female – a Theological Input

We all know the God of Sea was Poseidon, but we miss out he was not a true patron of the sailors. The actual patron of the seafarers, either merchants or pirates, was Aphrodite for the Ancient Greeks, Tanit – for the thalassocratic Carthaginians, Venus – for the Romans, and Inanna – for the Israelite tribes, Anahita – in the Aryan culture, and so on. What we are trying to say, she was always a goddess of love, war, and the sea altogether.

In Christianity she is a dual deity: Saint Mary, whose name translates somewhat into “the roaring sea”, and Jesus’s grandmother Saint Anne, whose name derives from Anahita or Inanna. The “star”, we know well, is also Venus, which is in fact the seafarers’ Morning Star!

Have you ever noticed that the classic wheel on boats quasi-always features 8 rays? The planet Venus is represented traditionally as an eight-pointed star. The same 8 rays we find in the classic compass.

Venus is the sailors’ star, that they prayed to all the time. Venus is also called the Morning star, as she is the brightest object in the sky in the early morning, before the dawn.

Depending on the season, she appears either in the morning before dawn in the East, where the Sun rises; or in the evening right after the sunset in the West. In the latter case, she is referred to as the Evening Star.

Venus was the navigational star in the Antiquity, identified as Aphrodite, the goddess of love and the patron of seafarers. The seas and oceans are governed by the goddesses of love since the beginning of time, or even earlier, in many cultures, even before the Greek were Greek and till now.

Why are ships referred to as she? Maybe that is to identify the goddess of love and seas!

Let’s count it a sustainable reason why are ships female.

When did ships start being called she?

There are reports found pointing that ships have been widely referred to as “she” since 1375 according to the Oxford English Dictionary. However, we question this version as we can see ships are “she” all the time in the observable history.

Are all ships female?

In a nutshell – YES.

When a warship bears a name like USS “George Washington” (on the picture) it may seem weird enough to refer to her by the feminine pronoun. Yet those warships take masculine names to express strength, might, toughness, or endorse a historical person. And, they are still “she”.

The naval tradition affirms categorically all ships are “she” without exceptions.

However – there is a political attempt in this crazy world to change the gender of the ships to neutral. For example, Lloyd’s List tries to rewrite the tradition by implementing “it” on ships, with no success so far, and no support in the maritime community at all, but they keep trying since 2004. What a shame.

Ships Are Called She – Is It a Unique Case in English?

The New York Times, February 1917: “If America with all her treasure of gold comes into the war against Germany she will be of incalculable help to her allies, regardless of anything she may do as a fighting force.” America, the country, is referred to as she.

Yet another beautiful example is found right in the Bible, particularly in Proverbs, where Wisdom is personified as “she”, while she is not technically a human.

“Wisdom cries aloud in the street,
in the markets she raises her voice;

At the head of the noisy streets she cries out;
At the entrance of the city gates she speaks:

How long, O simple ones, will you love being simple?
How long will scoffers delight in their scoffing,
And fools hate knowledge?”

We regret “Lloyd’s” ignore Knowledge, being in the maritime industry since the 1700s, not knowing why are boats called she much longer than their agency even exists, but trying to scoff at our maritime tradition. No, thank you. We Love ships, and Believe in naval traditions, while Love and Faith together form Wisdom – according to the Bible.

Why are ships called she – Final Words

Of course, we are free to choose a version or a few why are ships called she, that is why we suggested herein all version for that. Anyway, she is a “she”.

We have already quoted Admiral Francis Drake Foley earlier in this post, why are ships female, and now he explains to us how to deal with her wilding character:

“She may think you are not under command or control and shove off. If she edges aweigh, keep her steady as she goes, but do not sink into the doldrums. Just remember that to furnish a ship requires much trouble, but to furnish a woman the cost is double.”

Admiral Foley stands fast about why are ships referred to as she:

“Every good ship has a heart, just like yours. A trick at the wheel, like you, would have been welcome aboard when I was on ‘she’ duty for 40 years. May God bless you all, sweetheart.”

Hi, I’m Igor, Skipper of S/Y "The Hooker". A decade ago, I conquered my childhood dream: be a sailing captain, have a sailing yacht, sail anywhere and everywhere on the globe, and breathe freedom.
Read more

How Should You Pass a Fishing Boat 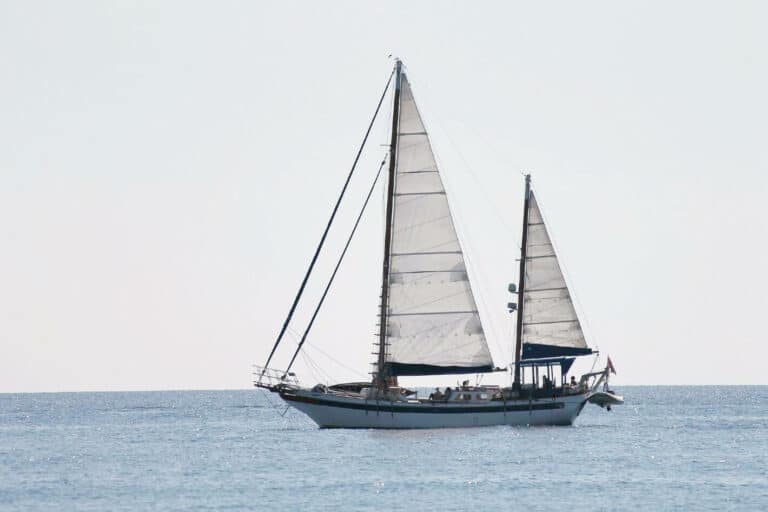 Difference between Ketch and Yawl Explained

How To Use Boat Fenders