If you are new to anchors, then you may be wondering – how do most anchors hold a recreational boat in place?

Well, traditional anchors work by digging into the seabed, yet not too deep, otherwise you risk to lose an anchor and a significant piece of chain. Once the anchor reaches the bottom, then you send down tens of meters on chain, as your boat floats on the water. Basically anchor and chain together hold the boat by their weight.

This is how most anchors work, but some designs may deviate from this procedure slightly, like stationary anchors holding buoys or small anchors for a rubber dinghy usually do not use a chain. Besides, different anchors have varying holding power depending on their design.

Below, we’ll have a look at common anchor styles and discuss which is the best for recreational boaters. In this article, we’ll also cover some practical anchoring considerations for boaters.

How Do Anchors Hold a Boat in Place?

So as already established, anchors generally hold vessels in place lying on the seabed where the chain adds even more weight. However, this is just part of the answer – there are some other aspects to this too.

How Much Of Chain Should I Send Down When Anchoring

For example, you anchor at 10 meters depth, then you send down about 40 meters of chain, so that about 20-30 meters of chain adding its weight will help anchor to hold the ship.

What Depth Should I Choose To Anchor

The classic advice is about 10 meters, for an overnight stay, yet it’s not too strict. There are other conditions, sometimes you feel well at 3-5 meter depth, depending how flat is the seabed, where’s the wind comes from, what’s the forecast, etc.

You can choose the anchoring place just looking at the chart, but a good idea also to ask other skippers who know the area well, and may advise where you anchor safely.

The Weight Of The Anchor Matters

The weight of the anchor matters – for a heavier boat the bigger anchor you want. While the shape of the anchor is responsible how good it may fit for a seabed. Some anchors are relatively “universal”, but you choose the seabed where you anchor carefully or you risk the anchor gets stuck down there in the bottom.

The archaic sandbags and rocks soon evolved into fluked anchors. These anchors are iconic and are the most recognizable among all anchor types.

The fluke anchor has been used for thousands of years. The Romans, for example, used it already in the 1st century AD, while they never accounted to be good sailors, but they learnt many practices from Phoenicia, the most thalassocratic nation of the Ancient Mediterranean, and from the Greek of course.

Types of Anchors and How They Work

Although the fluke-style anchor is the most recognizable and popular, it’s not the only type of anchor used today.

Over the centuries, plenty of other designs have been introduced. Although they all work in more or less the same way, they have distinct designs that make them suitable for different situations.

After the anchor reaches the seabed, it burrows into it. As your recreational boat drifts away from the anchoring point due to wind or water, the anchor gets buried even deeper into the ground.

Fluke-style anchors work really well when the seabed is composed of sand or gravel, but it’s not ideal in absolutely every case. This is where other styles of anchors come in.

Most commonly, grapnel anchors are used when the bottom is rocky. No matter how the anchor reaches the seabed, it can quickly hook onto bottom structure.

Although grapnel anchors are best for rocky bottoms, they also have some disadvantages, including their large size and the high risk of getting entangled in the rode.

Plough anchors are similar to ploughs (plows), hence their name. They are fairly effective with any seabed and therefore are highly popular among boat owners. With that said, plough anchors do not excel anywhere, so they aren’t the best if you want the very best hold in a particular situation.

Plough anchors have one flaw – they tend to break out of the seabed. Agricultural plows also like to escape the ground, so the two designs are sharing this downside.

The Danforth anchor features triangular flukes attached to a hinged stock. This anchor style is also designed to be burrowed into the seabed, but thanks to its flat and compact design, it’s easier to retrieve than traditional fluke-style anchors.

With that said, Danforth anchors typically do not hold in gravel or weeds. Besides, if the boat is moving when dropping the anchor or if there is current, the anchor may just float over the bottom because the large flukes act as a sail.

The Bruce claw anchor was introduced in the 1970s by Peter Bruce. This anchor design has been intended to address the downsides of the plough anchor. As a result, Bruce anchors aka Claw anchors do not break out of the bottom easily, though they set relatively slowly.

Claw anchors are fairly effective on small boats, but they get especially effective when large. Relative to their weight, Bruce claw anchors offer low holding power, meaning that they need to be oversized to reach the performance of competing designs.

Mushroom-style anchors work by sinking into seabed sediment. They are called “mushroom” because of their distinct shape.

Mushroom anchors have low holding power and thus should only be used on small boats. They offer very poor performance in rough weather and water as well.

Auger-style anchors have very high holding power, but they can be very difficult to set in deep water.

What Anchor is a Good Choice for Most Recreational Boats?

The following three types of anchors are most commonly used in recreational boats:

These are compact, have adequate holding power for small boats, and are reasonably effective when used in the right situation.

Does an Anchor have to Touch the Bottom?

Traditional anchors need to dig into the seabed to do their job. However, does an anchor need to always touch the seabed to work? Wouldn’t the weight of an anchor be sufficient?

Well, there are two cases here:

If your anchor can reach the bottom, then you are most likely close to land. In this case, the anchor does have to anchor to the bottom to prevent your vessel from drifting away and hitting another boat or the land. The weight alone probably isn’t going to be sufficient to keep your boat stable.

Well, seas and oceans are a bit special due to two reasons:

When ships do need to anchor in the sea or ocean, they use sea anchors (also called drift anchors). Sea anchors are shaped like parachutes and are designed to slow a vessel down by creating drag.

What Happens if an Anchor Gets Stuck?

Now that you know how anchors hold a recreational boat in place, you may be wondering – what if an anchor gets stuck?

Well, what to do if your anchor does get stuck in the bottom depends on the circumstances. For some perspective, here’s what you may do:

Do All Ships have Anchors?

Even though modern vessels may rely on thrusters to maintain position for a short stay, I seriously doubt if it is even legal to go out without an anchor for a cruising boat. Yes, all boats have anchors.

Besides, thrusters require fuel and energy to operate, add noise. They have also the advantages – they don’t damage the seabed and have no risk of getting stuck.

Do Ships Drop Anchor in Storm?

This mainly depends on where the ship is. But you’d better be very confident about the anchorage bay you choose to hide from the storm. Many sailors advise apparently going away from shore when it’s storming is the safest solution.

Near land, the captain may attempt to anchor to avoid crashing into the shore. But in deep waters where the anchor may not reach the bottom, a more reasonable course of action may be to just ride the storm out.

So how do most anchors hold a recreational boat in place? Anchors burrow into the ground, holding by their weight and the weight of the chain you send down, therefore the whole “system” prevents your boat from drifting away.

TIP Some people lose boats when leaving them anchored, do not underestimate the importance to anchor properly.

For recreational boats, an anchor is a must-have. You probably won’t be cruising away from the shore, so whenever you need to stop, just use an anchor to avoid crashing into someone or something.

Thanks for reading, and we encourage you to visit our blog.

Choose the Right Marine Cooler for Your Next Adventures!

Know Your Directions on Board a Ship 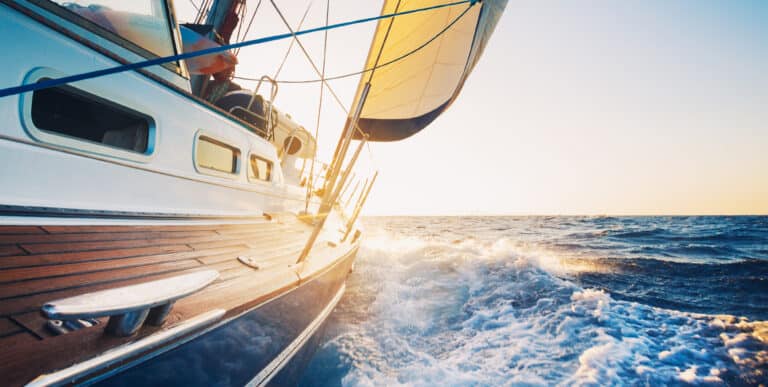 How Long Does It Take To Sail Across The Atlantic?